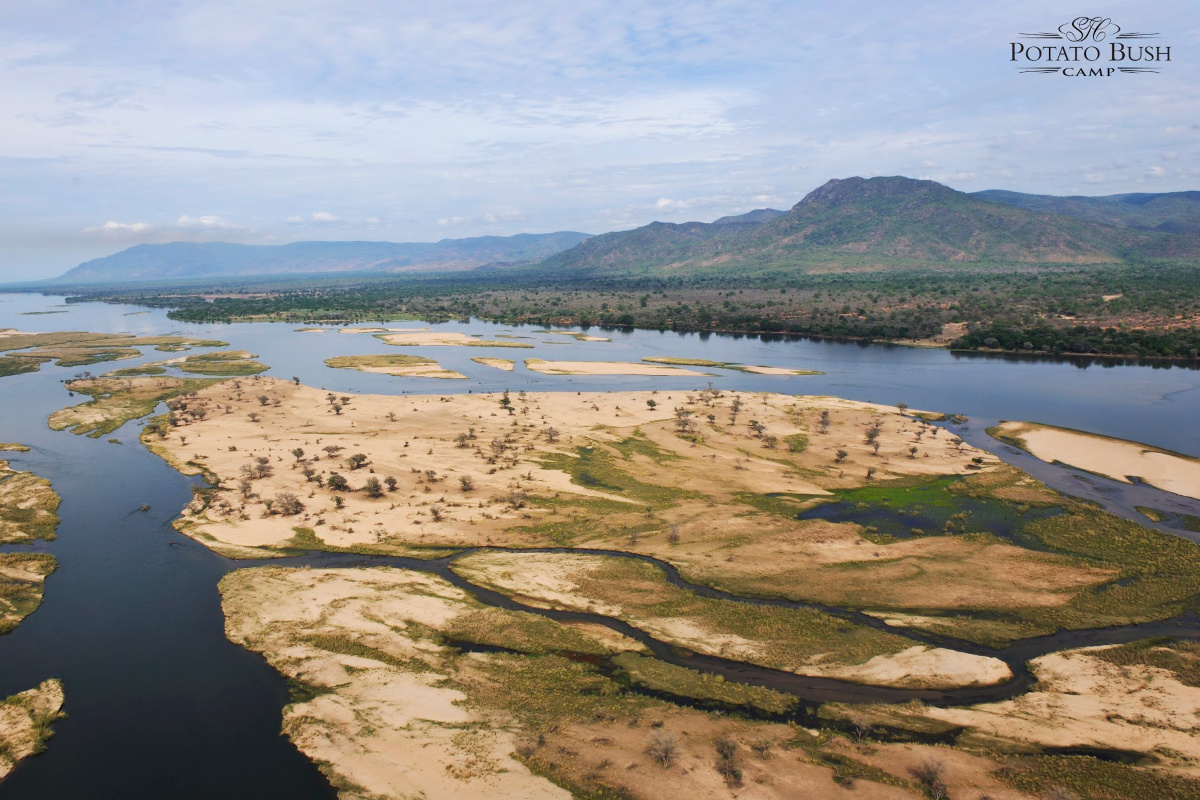 Zambia tends to be considered a seasoned safari-goer's destination and here I was having never been on safari, about to jump on a plane from Heathrow to an area coveted by Africa-philes.

During the short 20 minute flight from Lusaka to then Lower Zambezi, I was bubbling with excitement  for what would await us on the ground but knew I should savour this moment. As the plane dipped down into the valley, pods of hippos could be seen lazing in the water and as we landed I spotted an elephant reaching up to a tree in the distance. Our guide Charles – who would be with us throughout the duration of our stay at Potato Bush - was waiting for us at the airstrip and welcomed us with ice-cold fresh towels and a warm smile. A short drive from the airstrip a boat greeted us and we concluded our journey on the expansive Zambezi River.

As a first-time safari-goer, I had few expectations, but I can assuredly say I had not expected this. As our boat carried us down the vast river, elephants collected along the banks to drink, buffalos lazed in the sun and bee-eaters went about their busy business, all unaware or uncaring to our presence. The only animals who seemed to notice us were the hundreds of hippos popping up and ducking back down as we passed. In complete awe, I had to mentally pinch myself as the sun began to dip behind the escarpment.

James and Annekim welcomed us like old friends as our boat pulled up to the jetty at Potato Bush Camp. Refreshing drinks and comfortable couches awaited us and our hosts chatted to us about our plans for the next few days. I tried to concentrate, however the pink and orange sky reflecting off the water behind me were distracting and my hands itched to grab my camera.

We concluded our long day of travel with a delicious dinner hosted by Annekim, James and camp owner Jason Mott. Jason helped to build Sausage Tree Camp nearly 25 years ago. During the course of building the camp, Jason fell in love with the beauty and game of the area. He stayed and became a qualified guide and then manager, finally achieving his dream of making Sausage Tree Camp his own in 2000 and then later building Potato Bush Camp in 2012.

Aside from the grunting of hippos, the first thing I heard in the morning was a “Knock knock” from my ‘muchinda’ (butler) with a fresh pot of coffee in hand. Upon waking I could finally take in my surroundings; Catherine and I were staying in the fourth tent at Potato Bush – Family House. Set back from the river between mahogany and acacia trees the spacious, airy tent accommodated us in two rooms separated by a large living and dining area. After pouring my coffee, I stepped out onto the veranda area and took a seat looking past the plunge pool to the river beyond as the sunrise reflected on the water. Each tent and the front of house area at Potato Bush are connected by raised walkways, this makes one feel slightly safer when walking through camp especially if encountering any sort of wildlife – a reassuring addition for a first-timer.

The four tents at Potato Bush Camp are set off to one side of the communal area, with the family tent at the very end. From my room in this tent I could hear hippos trotting up and back from the water throughout the night on what is known as “hippo highway”. Each tent has a plunge pool for those warmer days and a cosy hammock to sit back and relax. My favourite spot was the woven couch on the veranda to sit and take my first sip of coffee in the morning.

Too excited to accept the original offer of a relaxed morning in the camp, we headed out on an early game drive. We were no more than a couple of minutes away from the camp before seeing an elephant and her baby. This would become a recurring theme as there is definitely no shortage of elephants and their young in the Lower Zambezi. Our most notable encounter was while watching three lions lounge in the sun, a beautiful elephant stood directly in front of our vehicle and reaching up in a tree showed off the whole inside of her mouth munching away, she then ambled off as we sat dumbstruck in the vehicle.

After lunch and some down-time in camp, we headed out on the water for a sundowner and some fishing – catfish, tigerfish and many others are plentiful in the river (all catch and release). This is certainly my kind of fishing – sat back as the sun began to set with a gin & tonic in hand. The first fishing trip of any stay is included, however the more avid fisherman may wish to pay for some additional time on the water. We then went in search of leopards on our evening drive. Unfortunately, no leopards this time, however the eagle-eyed Charles spotted an aardvark in the undergrowth – he said he hadn’t seen one all season so we felt incredibly lucky.

Still buzzing from our rare Aardvark sighting & not believing that our day could get any better, we didn't even notice that Charles had driven us into a stunning sight of dozens of lanterns in the trees and a camp fire burning... our alfresco bush dinner. Our candle-lit dinner felt so special as we looked beyond and could see only darkness, we felt like the only people around.

After two nights experiencing Potato Bush Camp and one last game drive with Charles it was time to head to Sausage Tree Camp. While the two camps are right next to one another – you could walk if you wanted – they feel completely separate in style and atmosphere. Potato Bush Camp offers guests a feeling of complete seclusion with only 4 tents in the camp all set back from the river you feel like you are in the heart of the bush – which in reality, you are. The rustic tents are reminiscent of a classic safari tent while feeling safe and secure for young families or those first-time safari explorers. Paired with the more accessible price point this - despite the area's renown as a 3rd or 4th time safari destination - is the perfect camp for those exploring the area for the first time or needing those back to nature vibes.